Slaty-backed in the UK?

Wouldn't a very clear 'string of pearls' be unusual in Herring? I can image that dark-winged Herrings exist but this shade of grey seems much too dark.

Somehow it reminds me of a conspicuous LBBG-like 3cy bird that was present for a few weeks at my local patch in Amsterdam:
http://www.xs4all.nl/~daarruud/fuscus3f.html
Top

I thought it might be of interest to you to see pictures of two similar birds from SE Norway.
Both were discovered from a distance and suspected to be graellsii LBBGs (rather rare up here). Closer observations showed that leg colour and wing-tip pattern seemed to point more towards dark argentatus. I have no idea whether these birds are dark argentatus, hybrids with marinus involved or something else, but since there seems to be no limits to how an argentatus can look, I tend to lean towards dark arg...

SBG are out of the question off course, but note that both birds seem to show "strings of pearls" to a certain degree, especially from below. Feel free to comment!

Hi all,
@Peter: You are right that it doesn't completely match the bird from Greg, but the point that I tried to make was the similarity on other points.

Maybe it's good first to write down the apparent features of such birds, and of course the birds in the other pics like the one photographed by Stein and Ruud.
I think Greg's bird combines:
- obvious darker back than surrounding HG (but paler than what 'the average' seems to be in Japan);
- obvious string of pearls;
- very broad trailing edge to secondaries;
- strong bird, fierce facial expression (but male / female problem sneeking in);
- P10-P9 pattern in Greg's bird is a bit like marinus I think.

The obvious trailing edge is something very prominent in SBG images from Japan, and we should in (northern) Europe if such patterns can be found in our region as well. The same for that string of pearls. Problem of course will be the uncertainty about the region such birds come from.

Looking at Stein's bird for instance, it combines a few of these points, but the trailing edge is much thinner, and I'm afraid we are not looking at a fully mature bird here (which may then clarify the bold streaking on head-neck).

@ Ruud: The white tongue-tips on the outer primaries are more extensive than usual indeed, but such things happen.
Here is an adult Herring Gull from last spring. It held a territory in the colony of Zeebrugge, Belgium, and was therefore probably a local bird: 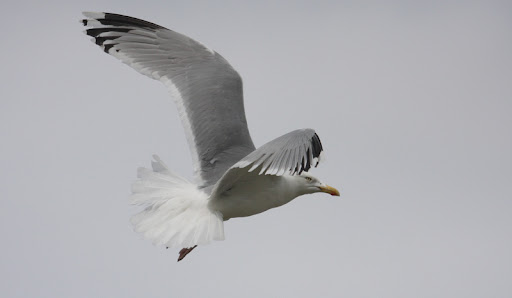 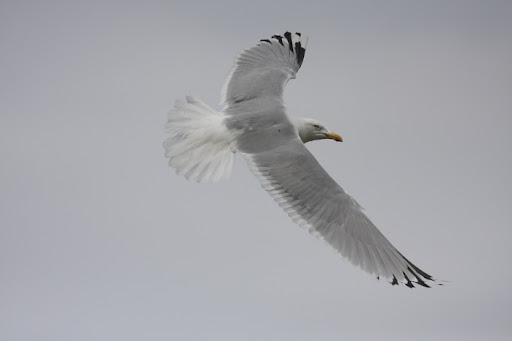 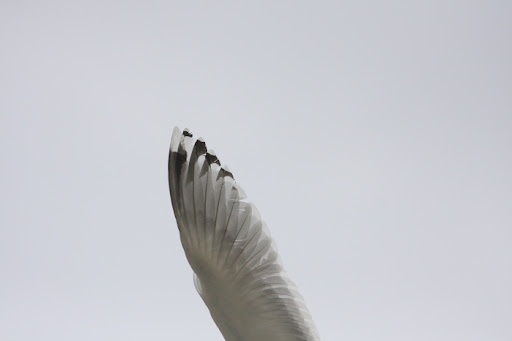 wow! how often does such an extensive white/reduced black occure in (presumed) argenteus!? i thought such beasts are more likely very northern breeders?
Top

Birds like this are rare over here, of course - but I have a few more, and I know of a few caught and ringed in the Netherlands (see, e.g., PowerPoint on the Gull Research website).
My guess is that these are intergrades argenteus x argentatus (?) Though their upperparts are often just as pale as in the former.
Top

Another dark argentatus from today, in Simrishamn. Here in southernmost Sweden we regurlarly get such birds in winter. Sometimes you´ll find app one or two per 300 ad argentatus or so. They always looks perfectly fine for argentatus in shape, face expression and proportions (as do Greg´s and Stein´s birds to me) and also shares the large amount of white in wing tips. In the flight shot the upper bird is the dark one, but also note the massive string-of-pearls effect in the lower bird.

Yes, the pic by Steve (http://www.birdersplayground.co.uk/Recent%20Images.html) are some of the best so far in this ongoing story.
Notice the tiny white mirror on p9 in the left underwing. There´s however, no reliable pic yet, showing the so called 'correct'' underwing tone, which is darker in true SBG (http://starling.dyndns.org/~birdkitahir ... s/ad01.htm), except perhaps this one (http://www.netfugl.dk/pictures.php?id=s ... e_id=38651) and this one is fairly similar on the upperwing
(http://www.netfugl.dk/pictures.php?id=s ... e_id=24731) Compare with the Latvian bird (http://chrisgibbins-gullsbirds.blogspot ... tures.html)
In fact, there´s imo not much that wouldn´t free this gull as being a fairly good candidate as SBG, the bill, both size and colour, on the base and size/colour of the gonys spot, the broad trailing edge (secondaries and inner primaries, string of perls, structure, leg colour (being less raspberry than normal according to some however, but more so in some pic) and iris colour (suggested as to dark by some). However, such an extraordinary find in this part of the world needs extra caution. Who knows whats going on in the varios breding grounds, with vegae and so on? Some of the details can be found at Surfbirds forum.