smallest mirror on P9 ever?

smallest mirror on P9 ever?

On the 18th of march I visited my local patch with Bram Rijksen to look for some nice (colourringed) gulls (Caspian, Yellow legged, Baltic..). In the first mixed group of Common and Black headed gulls Bram found an odd looking Common gull (CG) with a very pale yellowish eye. I took some pictures with a good view on the head and breast. The size of the bird (overall, head, bill, etc) wasn't good for a Ring billed gull (RBG). What could it be? I walk around the bird to get a better view of the profile and to rule out other features of an adult RBG.

When I walked away for the group something else scared them and the flew away. I managed to get a few photos to get a good look at the primary pattern.

The bird quickly landed in a lamppost so we could get some better looks and photos. After getting back at the office we took a closer look at the photos and where confused about the primary pattern and the mirror on P9 and 10. Searched the web and couldn´t find any CG with a primary pattern like this one. We started to think if it could be a small and odd RBG... or the H-word? Okay it's more of a CG than anything else but the primary pattern..... keeps me puzzled.
What do you think of this bird?

Re: smallest mirror on P9 ever?

Hi Herman,
There is not much on the web about possible delawarensis x canus. However, it makes ense to expect a few of the birds stranded in Europe will try to breed in European colonies, and canus logically may be expected to be a candidate. We had courtship of delawarensis towards non-responding canus at Maasvlakte colony in 1986:
http://www.dutchbirding.nl/content/jour ... 1988-1.pdf (in Dutch, with summary pp.20-23)
We also have had returning birds for many years at Goes and Tiel in the Netherlands, expected to go north in spring and maybe tried to breed in Scandinavia?

Recently some odd birds in Spain, pictures copied here (thanks to Delfin!):

Above: Two pictures of a bird present at Madrid, November 2008. Look good for delawarensis, but blackish primaries point to 2nd cycle, and then the lack of grey coverts is apparent. Hence, maybe hybrid?

These days, another bird was present as well, supposed to be a hybrid: 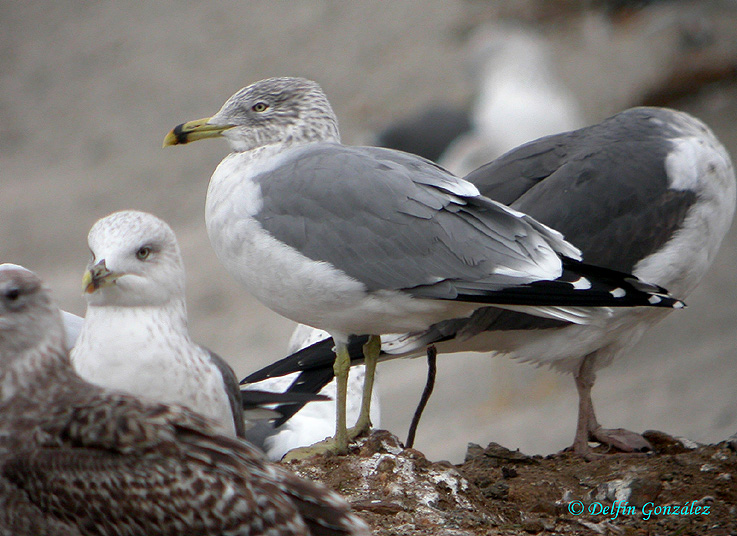 These are all resting birds, so no wing-tip patterns visible. I'll check out if there is more I received....
Mars
Top
Post Reply
2 posts • Page 1 of 1